The Gaels that came to Nova Scotia were Christian - roughly half of them were Protestant with the other half being Catholic.  They were also British.  The first inhabitants of Nova Scotia were the Mi'Kmaq who had a good relationship with the French who had been here in the province since the 1600s.  Their relationship with the British was not so good.  Many of the British were Protestant and didn't mingle much with the Mi'Kmaq who like the French, were Catholic.  Nova Scotia, by the 1800s, belonged to Britain and the Mi'Kmaq had lost much of their land to British settlers - many of them Gaels.  Naturally, they were unsure how to greet the small party of Gaels who arrived on the shores of the Bras d'Or Lake early in the 19th century.  Accounts of this meeting have been told by Gaels and Mi'Kmaq alike[1].  The following is an English translation of a version of the story told by Mickey (Bean Nìlleig) MacNeil of Iona, Cape Breton:

The Gaels and the Indians

When the first Gaels came across (to Iona), the original people here were the Indians[2].  The Gaels came over and they had only a small crew.  When they made land with their boats, the Indians were ahead of them.  Since the Indians were there before them, the Gaels perceived that there was going to be difficulty and that the Indians had no wish to befriend them.  The poor Gaels, considering their number and that of those against them, saw there was little they could do.  The one thing they thought is that it would be be best for them to make their peace with God considering their inferiority in manpower.  They crossed themselves, and when they blessed themselves, the Indians noticed what the Gaels had done.  The Indians then knew that the Gaels were Catholics.  However, the Indians had been deceived so often...but they had to find another way of asserting if indeed the Gaels were Catholic.  Did they possess anything that would prove they belonged to the Catholic faith?

One of the Gaels opened a small trunk and he took out a cross.  He held the cross up.  When he raised the cross, the Indians shook hands with the Gaels, realizing they were of the same religion.  Since they were on the same side, the Indians had no wish to make any further trouble.  They saw that it wouldn't be fair of them because of their superior numbers.

Now to bring things to a conclusion, on that same location where the Gaels met the Indians, a church was built in that very spot (St. Columba's Church). 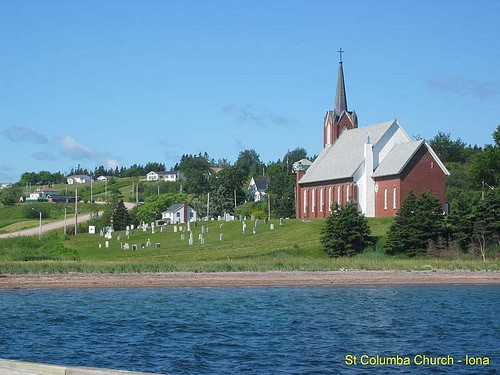