Milling, or a' Luathadh in Gaelic, is a process in that is used to shrink up and soften a cloth after it has been taken off a loom.  Have you or someone you know ever shrunk a wool sweater by accident?  If a cloth wasn't milled, this is what would happen to it when you washed it.

The new cloth would first be soaked and carefully wrung out.  The liquid would often just be water but many used stale urine that had been collected throughout the year.  The urine helped in the shrinking and softening of the cloth.  You would then beat the cloth on a rough surface until it shrunk however much you wanted it to shrink.

There was always someone at the table who was an expert at milling and could measure how much the cloth was shrinking and decide when it was milled enough.  It was important to be careful not to shrink the cloth too much and to shrink it evenly because so much time and effort went into making the cloth in the first place.  These are the steps to making the cloth: 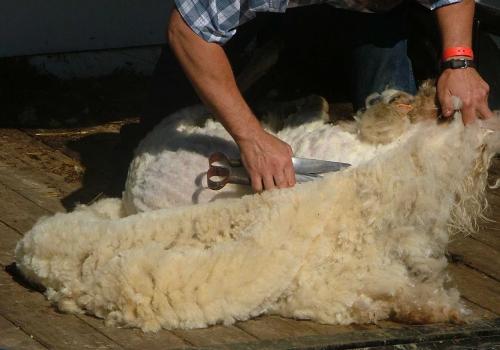 A lot of work!  People didn't have many items of clothes because they took so long to produce.

If you had a lot of work to do, you could always hold a "frolic" and invite all your neighbours and family to join you and help with the work.  Everyone would bring their own weaving and the group would take turns processing everyone's cloth.  Communities also held spinning and barn-raising frolics as well.  Milling frolics were usually held in the Fall or Winter when there was not as much work to be done outdoors.

The cloth is sewn in a circle and placed on a rough surface, perhaps a barn door or rough planks up on some barrels.  Everyone sat around the cloth and beat the cloth to the rhythm of the songs.  Songs were sung to make the work enjoyable, keep everyone in rhythm and some say to put a blessing on the work.  One person sings the verses and and everyone joins in on the chorus.  Nowadays, we simply beat the cloth back and forth but if you were to actually mill a cloth evenly, you would also have to be passing it - clockwise, of course as this was natural (the way the sun travels in the sky) and it would be very bad luck to go the other way!

The following is a video of a milling frolic held at the Gaelic College:

Milling frolics are still popular in Nova Scotia today, even though most of us don't produce our own cloth anymore.  It has always been a good chance to participate in Gaelic culture without having to know the language.  Choruses are usually short, and because there are so many verses, you get a lot of chances to practice.  People of all ages participate in milling frolics.  Don't worry if you don't get a seat at the table...  Another Gaelic tradition is for people  who are not at the table to hold hands, sing and swing their arms gently to keep time to the music.