What was the “Spanish” flu? 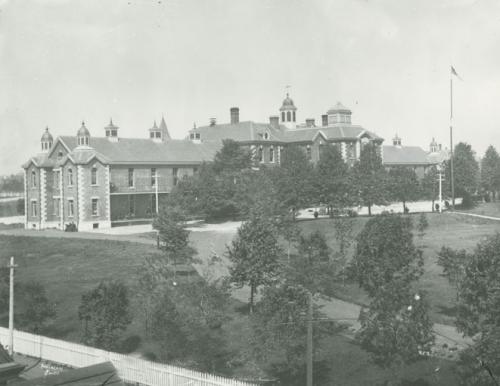 Influenza, often referred to as the flu, is an infectious disease caused by a virus. While most forms are generally relatively mild, symptoms can be severe, and mutations of different viruses over time can cause more serious epidemics, or widespread outbreaks of the disease in a community.

When an outbreak spreads across a large region, from continent to continent, or worldwide, it becomes known as a pandemic. Outbreaks with particularly virulent mutated strains of the flu occur a few times every century, and this is what occurred in 1918. It is estimated that Spanish Influenza infected half a billion people, and killed perhaps 50 to 100 million in total - between three and five percent of the world’s population at that time, and the worst pandemic ever. In Canada, at least 50,000 people died from the flu – almost as many as died of enemy action in the First World War. The majority were otherwise healthy individuals between the ages of 15 and 35 – those who generally would have had the best odds of surviving a normal influenza outbreak. Why this outbreak was so deadly remains a mystery, and a subject of ongoing medical research. 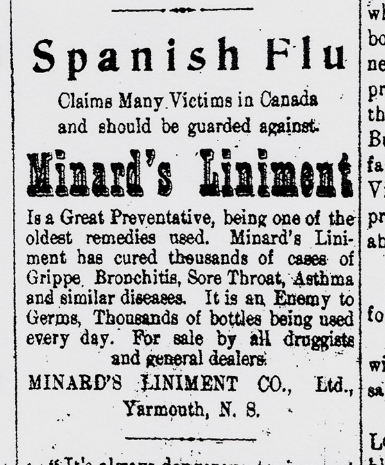 Why was it called the “Spanish” Flu?

The 1918 virus is commonly referred to as the “Spanish” flu, because the first newspaper reports claimed that the disease had originated in Spain. This was not correct, and was likely because of Allied censorship during the First World War. The latter attempted to prevent reports of influenza among the various armies in France and North America being published by the press. But reports of outbreaks in neutral Spain were widely published, and the “Spanish” moniker and myth of a Spanish origin was quickly, if inaccurately, adopted. The actual origin of the 1918 influenza outbreak was likely in an American army camp in Kansas, where troops were preparing to go overseas in crowded conditions. It quickly spread throughout North America and Europe, and via troops returning from the war.

At the time, it was believed that influenza was not a virus, but was caused due to bacteria. This hindered efforts towards developing a vaccine that could limit its spread. It was only in the 1930s that medical research confirmed that the 1918 outbreak had been caused by a virus, much later identified as a H1N1 strain.

The influenza virus weakened a person’s immune system (how the body defends against infections), which usually resulted in pneumonia, and then death. This is also the reason that numbers of cases and numbers of deaths from the flu will always be a best estimate, and evolve as research continues. The numbers presented here are those of individuals recorded as dying from the flu, using research that was completed in September 2018. They only include those recorded as dying of pneumonia if there is other evidence to show that such a death had been caused by the flu. 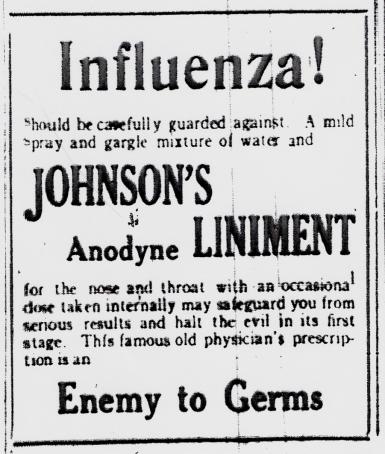 Symptoms and treatment in 1918

The flu struck quickly and without any warning. Victims suddenly began to shiver, suffered severe headaches and back pain and then collapsed. They then developed a high fever, a hacking cough, and aching joints. Most victims survived for three or four days after which they developed pneumonia and cyanosis (a blue tinge to the skin caused by low blood oxygen levels) which brought on their death. Although many companies took advantage of the pandemic to try to sell unwitting customers various flu remedies, there was no real treatment. Without knowing the origin of the disease, and without recognizing that it was a virus which required a vaccine, medical authorities could only isolate patients and support them with nursing care. 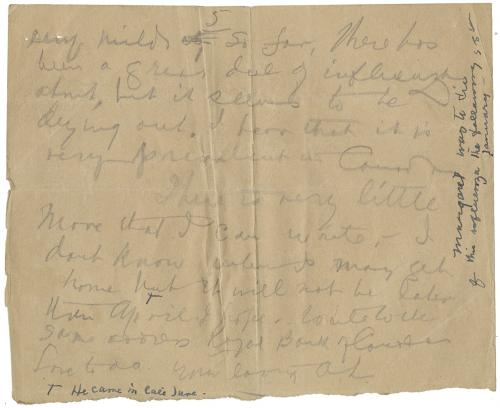 Part of a letter from Angus L. MacDonald to his mother, 12 December 1918. MacDonald, a future premier of Nova Scotia and Canadian minister of defence for the navy in the Second World War, wrote home after being wounded serving in France, noting that “There has been a great deal of influenza about, but it seems to be dying out. I hear that it is very persistent in Canada” – lines that seem to have escaped the eye of the censor.