How did influenza reach Nova Scotia and spread? 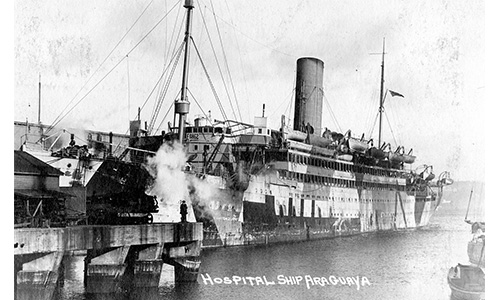 HMNT Araguaya (formerly HMHS Araguaya) tied up alongside at Halifax. After the sinking of HMHS Llandovery Castle by a German U-boat, British hospital ships were recommissioned as naval transports and painted in dazzle camouflage.

Perhaps unsurprisingly given the maritime nature of the province of Nova Scotia, the arrival of the Spanish Flu often came via the arrival of ships with sick seamen or returning troops, or New England fishing schooners in various ports around the coasts of the province. We cannot say for certain how the very first instance of the flu arrived on Nova Scotian shores. It may have been when the HMHS Araguaya, a hospital ship returning from overseas with Canadian soldiers, arrived in Halifax on 7 July 1918. It was immediately placed in quarantine, with 175 men ill from influenza among the 763 wounded soldiers aboard.

The first recorded death from the pandemic was reported on 1 September 1918, in Belle Cote, Inverness County, Cape Breton, when 26-year-old Marjory MacDonald succumbed to the disease. Nine more individuals died in the small community of Belle Cote in the next two weeks. On 11 September, the first recorded death in Halifax County occurred at Beechville, and on 22 September the arrival of 500 American soldiers, already suffering from influenza, in Sydney, Cape Breton, brought the disease in full force to that island.

Similarly, on 23 September, the first death in Yarmouth was reported, after the influenza was brought to the South Shore of Nova Scotia by fishermen from Gloucester, Massachusetts.  By 26 September, there were outbreaks on several ships in Halifax Harbour, including the cruiser HMCS Niobe, the Donegal, and the French cable ship Jeramec. 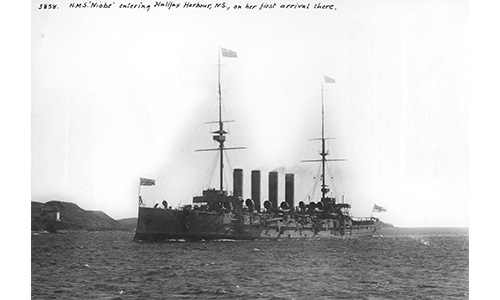 From that point forward, the flu spread throughout the entire province like wildfire. The animation presented below, based on new research of Dr. Allan Marble and others, shows the progression of the flu across Nova Scotia, month by month from August 1918 to December 1919. Each dot represents an infected community, and dots will appear on the map the first time a case was identified (using data from individuals known to have died from influenza) in that specific place. Therefore, the accumulating dots provide an indication of how the disease spread across the province. The colour of each county, and the number that appears within each county’s boundaries, represents the cumulative number of known deaths in that county month by month. By the end of December 1919, at least 1,984 Nova Scotians had died from the pandemic, while at least another 281 died between January and April 1920 (not shown here) for a total of some 2,265 dead – more than were killed by the 1917 Halifax Explosion.

Number of Deaths by Date of Onset of Influenza in Nova Scotia by County, August 1918 to December 1919