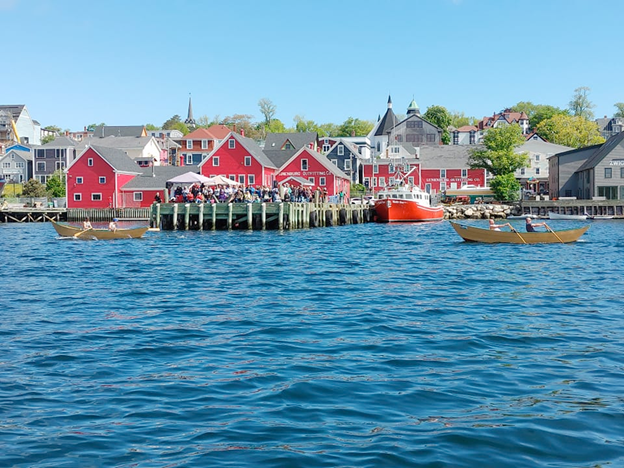 The morning light is calmed by high, dappled clouds, and the sea around Adams and Knickle wharf is an opaque turquoise. There’s an elation among the people gathered today as the 70th annual Dory Rowing Competition gets underway.

The weekend tourist rush is not yet buzzing at 9 am, but a crowd of forty or so people are here to watch the races. At the end of the wharf Lunenburg’s Dory Rowing Association has set up pavilion tents with merchandise and sign up forms; an organizer narrates the proceedings with a microphone and two loud-speakers for those of us who aren’t versed in the finer details of the competition. 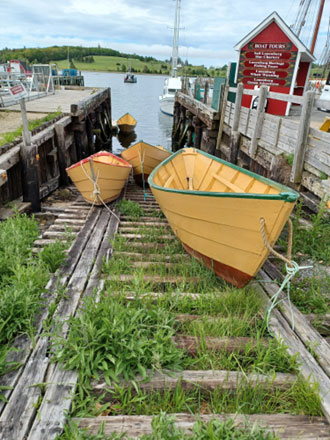 There are to be three races today: mixed pairs, senior men’s, and over 50 men’s. The competitors row 15 foot “trawl” dories: the same style which nested on the sides of grand banks fishing schooners when tub-trawling was the high-liner method of choice. These dories are capable seafaring vessels thanks to their flat bottom construction, and long overhanging bows which help them lift over heavy waves. It was not uncommon for dorymen to row a mile or more, after their lines had been hauled, back to their schooners.

Dories are no longer used in the commercial industry. The technique fell out of fashion with the advent of steamer trawlers, but their legacy as the workhorse of the sea lives on in these annual races.

As I blend in with the crowd a gunshot signals the 5 minute warning of the first race. In that 5 minutes competitors have time to warm up and make adjustments to their gear before they’re needed at the starting line. In international competition this rule is strictly enforced and any team not ready by the end of those 5 minutes will face disqualification. Today, however, the rules are relaxed and everyone is happy to see some action on this historic waterfront. 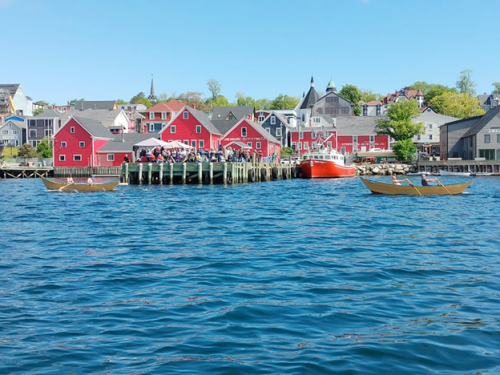 Lenny Eisner, a past dory rowing champion, watches the races with pride. In years gone by he says the waterfront would have been packed with people, shoulder to shoulder, come to cheer on the racers. “They’d be climbing all up the booms to get a better viewing,” he said as we stood by lobster traps, and that each division would have had to race multiple heats throughout the day.

Today, our modest showing has some of Lunenburg’s finest rowers, as well as some new faces out to witness and celebrate our ongoing heritage. As the 5 minute warning comes to a close the dory rowers take their positions, making small adjustments at the signalman’s behest. Until finally, when the boats are positioned just right, the signalman’s voice booms through a handheld megaphone for all to hear: “hold your dory, hold your dory… Ready…” And after a moment, a gunshot rings.

Wooden oars thrum against the tholepins, and the rhythmic set and pull of the rowers’ blades echo across the harbour. “We have a race!” 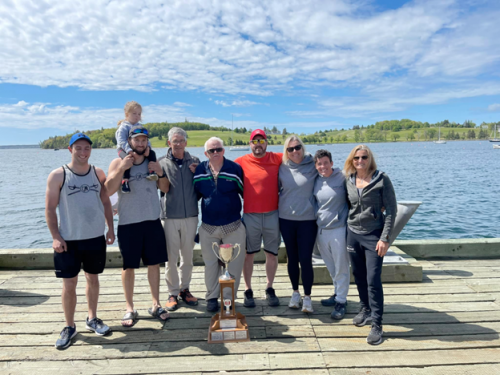 Another round of eliminations will take place August 13th and then the finals will be rowed August 20th in Lunenburg.