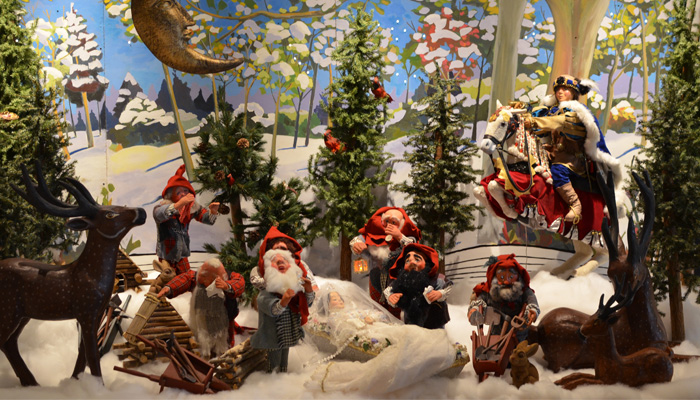 Snow White and the Seven Dwarfs at Mills Brothers

Mills Brothers, the well-known fine clothing store that graced Spring Garden Road in Halifax for many decades, first displayed Snow White and her friends in the late 1940s. One of the store’s original owners, Hugh Mills, purchased the dolls, manufactured by the firm Heimotion,in the Black Forest region of Germany shortly after the Second World War, and displayed the scene into the 1950s.

After some years in storage, the display returned in 1973, when Jane MacLellan, Hugh Mills’ niece, continued the tradition.The dolls had been badly damaged in a 1966 fire, but were refurbished by Joan Doherty, a local doll maker (whose work is also found in the Nova Scotia Museum cultural history collection).

In more recent years Catherine Arsenault, Karen Brazill, Audrey Parker, Mickey MacDonald and others all ensured the dolls were cared for and displayed every year, in time for the annual Santa Claus parade, now the Holiday Parade of Lights.

The Nova Scotia Museum is very pleased to have the privilege to continue this tradition, for future generations of Nova Scotian children to enjoy these treasures every Christmas.
The completed display at the Museum of Natural History's Holiday Village will open on Wednesday November 16th and remain on display until January 3rd.

Windows into Christmas Past

From the 1870s on, seasonal window displays were the main way thatmerchants celebrated holidays. Such scenes were made possible by new industrial techniques of glass-making, which allowed for large, obstruction-free window panes in storefront displays.

The appearance of Snow White and friends in the windows of Mills Brothers was the sign to families everywhere in the city that Christmas was officially on its way.

While not a traditional Christmas scene, this fairy tale display came to symbolize the holiday season locally. Snow White became the most popular and well-known of several such displays throughout Halifax.

Simpson’s, Woolworth’s, Eaton’s, and other Halifax and Nova Scotian merchants also displayed toys and Christmas scenes in their store windows.

Caroles (with carollers and song sheets for families often provided by merchants) often were heard in and outside of stores, as children gazed in wonder at the displays and dreamed about the presents Santa would bring them.

Over the years, designers turned such scenes into an art form, allowing the imagination of children to take flight in new ways every Christmas.

The History of Snow White and the Seven Dwarfs

“Snow White” is a German fairy tale that was first published in 1812, as part of Grimm’s Fairy Tales. There are many different variations of the tale both over time and in different cultures. The dolls displayed here are largely based on the German original. It featured many elements also seen in the modern Walt Disney version of Snow White (first widely popularized in the 1937 animated film), such as the evil queen, the magic mirror, the glass coffin, the poisoned apple and the dwarfs.

But Disney also made changes. For example, the dwarfs themselves were only first given names in the 1912 Broadway version. The seven were known as Blick, Flick, Glick, Plick, Quee, Snick, and Whick, until Disney popularized them as Doc, Grumpy, Happy, Sleepy, Bashful, Sneezy and Dopey.