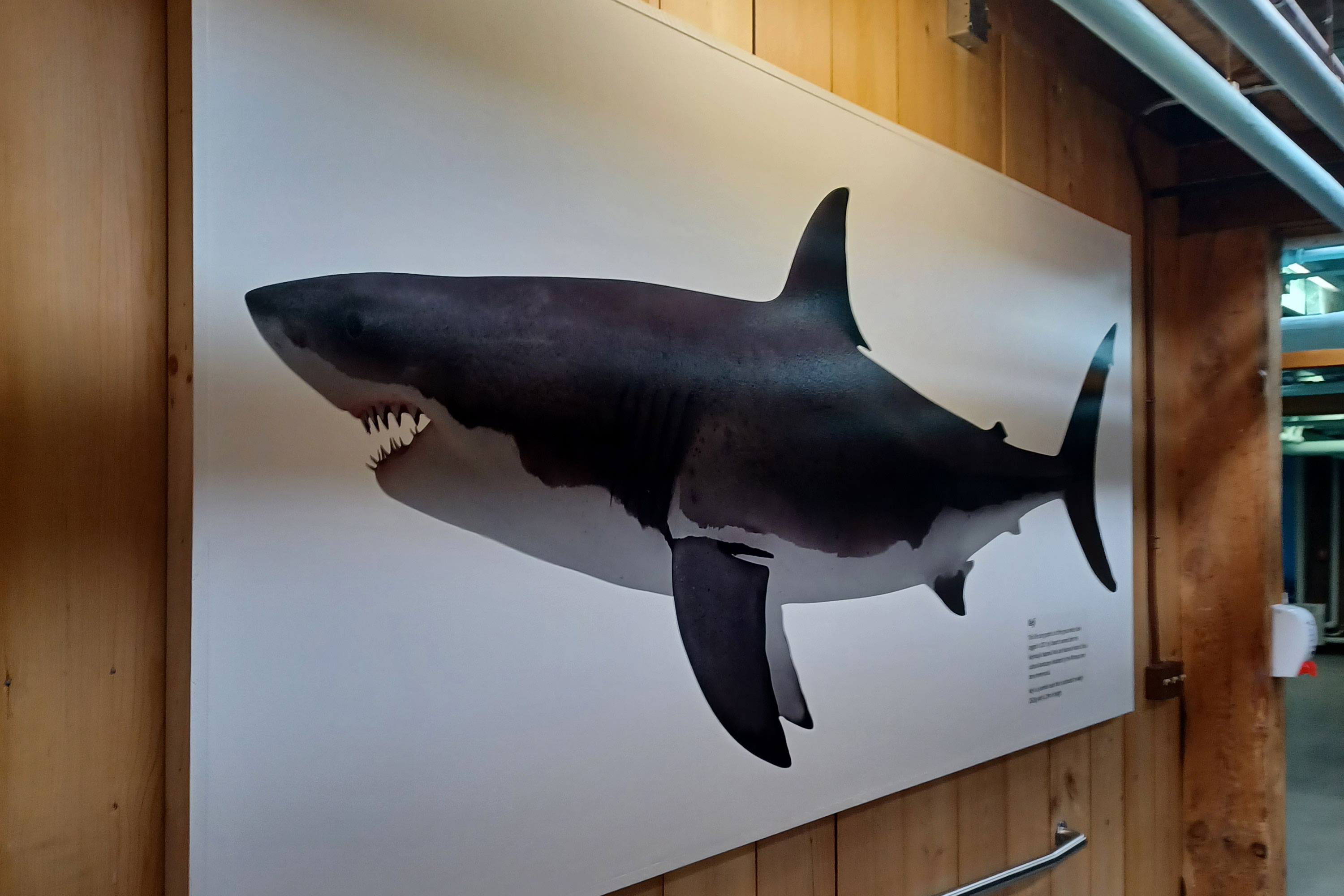 Idyllic harbour cruises in Lunenburg are a treat for tourists and locals alike.  Hook-nosed grey seals sun in the shallows and dive for schools of oily fleshed mackerel, errant strands of wrack drift amongst the turquoise sunbeams, harbour porpoises breach rhythmically for breath.  And along the waterfront you can see hundreds of years of human labour curated into a neat couple of hours.

On an ordinary day, Chris Selig, a harbour tour operator, and his host of happy customers tour through Lunenburg Harbour and out past battery point.  Just off the starboard side, as the tourists and the tour guide watch the porpoises, a great white shark erupts from below and snatches the unsuspecting porpoise.

This type of encounter, shocking and adrenaline inducing, is not as rare here in the North Atlantic as we may think.  More importantly the presence of white sharks can be a good sign for our ocean ecosystems, and in turn for the foundation of our present-day cultural incarnation – the fisheries.

White sharks are powerful animals.  They evoke in us our most primal connection with the wildness of the sea.  Slate coloured dorsally they blend in with their favourite rocky coastal hunts where they hunt seals and other large mammals.  White Sharks are temperate animals that inhabit the cool waters of the continental shelf, straying south into warmer waters in the winter.  Why we are starting to see a greater number of white sharks is a complex matter.

Historically the Gulf of Maine and the Scotian shelf have been the perfect feeding grounds for this apex predator.  According to Dr. Bob Heuter of Ocearch there is evidence that they’ve always been in this part of the world.  From the 1960’s to the 1990’s, the population of white sharks depleted drastically due to the catching of bycatch species that are critical to the ocean food web.  These bycatch species support a small part of a shark’s diet but are key food source for the larger animals that are white shark’s primary prey.

Climate change and warming waters effects the entire ecosystem, white sharks included.  As that planetary threshold shifts further North the patterns of all ocean life should be viewed in the context of their relationships to several factors (food source availability, changing traditional habitats, general ecosystem health) rather than as isolated events.

Another layer to the increasing sighting of these animals is that as the waters of our once frigid North Atlantic warm, we are seeing an overall increase in human activity in these typically avoided coastal areas.  The fact that there have been so few shark attacks, Dr Heuter says, “speaks to their intelligence as a predatory animal,” and that they know the difference between a seal (food) and a human (not food).  White shark’s evolution predates us by many millions of years, and the feeding habits that made them apex predators were established long before we entered the picture.

This presence of white sharks serves as a reminder that the Ocean is a living a wild place, and like other wild places a degree of awareness must be practiced in order to safely and respectfully interact with its wonders.  Check ocean tracking organizations like Ocearch; enjoy ocean recreation with a friend, be on the look out, and be wary of complacent naivety; do not be content with the simple answer or shy away from the ocean’s great complexity.  When the presence of sharks is taken in this context of the ocean’s greater schemes.

Ecosystems, if given the opportunity, have a way of bringing themselves into balance, and the presence of white sharks is a key indicator of a positive trend.  Seals, the cod stealing nemesis of our ground fishery, could be kept in check by the increasing presence of white sharks.  As far as controlling our seal populations Dr. Heuter thinks the task is simple: “let the white sharks do the job.”

The white shark that Chris Selig saw on his harbour tour was a juvenile and could have been Keji:  a 600-pound male tagged by Ocearch in 2012.  Chris Selig and Dr. Heuter both think people should be aware and that there’s surely more white sharks out there that are not tagged.  “When it comes to white sharks in Atlantic Canada, we think we’ve only just uncovered the tip of the iceberg,” Dr. Heuter says. This region is so important for sharks that Ocearch will be commencing their fifth expedition in our waters next month when they head up to Magdalen Islands and the southern coast of Newfoundland to gain a better sense of shark activity in the Gulf of St. Lawrence.

Perhaps unduly, white sharks evoke in us another primal connection to the sea: fear.  But with more information surfacing, and a more open imagination towards the importance of these ancient creatures, perhaps our relationships with the North Atlantic can deepen.  A place whose ancient origins crafted the fabled great white calls for nothing less.

If you wish to learn more about Sharks and efforts scientists are undertaking to better understand these ocean giants go to Ocearch’s wesite at ocearch.org.  There you can track behemoth’s like Nukumi, named after the Mi'kmaq word for Grandmother: a 3500-pound great white tagged off West Ironbound Island.  Or stop by the Fisheries Museum of the Atlantic, in Lunenburg, if you think you can stand face to face with a 600 pound portrait of a juvenile white shark named Keji, and speak with our world class interpreters about Sharks and their importance in our North Atlantic fisheries and ecosystems