How do we know how old a rock is?

How do we know how old a rock is? 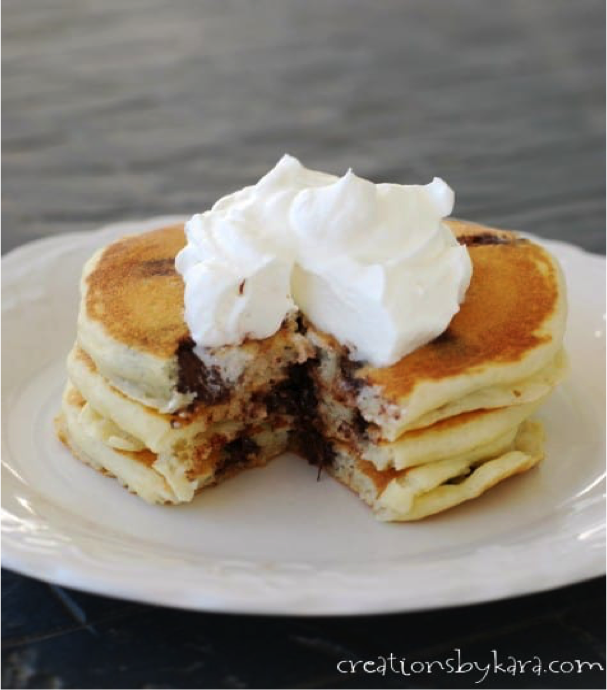 One of the most common questions we get on our guided tours to the Wasson Bluff fossil research site is, how do we know the age of the rocks?

The age of a rock can be determined using two methods: relative dating and radiometric dating. Question answered. I’m sure you found that brief answer satisfying. No? I guess I will elaborate…

This form of dating is very intuitive. It does not give precise dates but rather the age of rocks relative to other rocks. Here are some of the principles of relative dating using pancakes as an example. 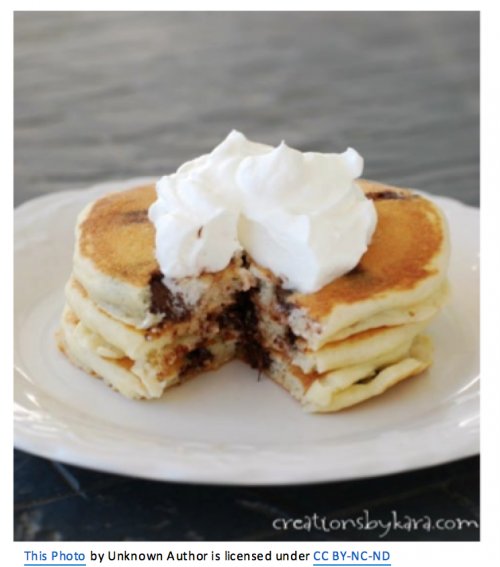 1. Principle of Superposition: Rocks were originally layered with oldest on bottom.

Imagine you are making pancakes. When you stack the pancakes, the first pancake to be made will be the bottom layer. Each pancake layer going up is fresher than the last.

2. Principle of Original Horizontality: Almost all rocks were deposited in a horizontal layer.

The pancake batter spreads out in a horizontal layer on the pan.

3. Principle of Lateral Continuity: Layers of rock are continuous until they eventually taper out.

Pancakes are a continuous layer that tapers out at its edges.

4. Principle of Inclusions: Any rock fragments found inside another rock (inclusion) is older than the host rock.

Blueberries inside a pancake had to have been grown before the pancake batter was made.

5. Principle of Cross-Cutting Relationships: Folding, faulting and other deformation events are younger than the rocks.

You can only cut into pancakes after they have been made.

6. Principle of Fossil Succession: Rocks that contain the same assemblage of fossils are of the same age. Fossils are the remains of biological organisms that evolve and change form over time. The forms of fossils within rock can help to identify its age.

Unfortunately, this is not easily explained with pancakes…

Some rocks contain radioactive elements that decay from one form to another at a known rate. The ratio of the elements is measured one of two ways to determine the age of the rock or object. Many people are familiar with radiocarbon dating. Organic material such as bone contains Carbon-14 that, over time, will decay to Nitrogen-14 (bodies only take in Carbon-14 while living). Radiocarbon dating measures the ratio of Carbon-14 to Carbon-12 (a separate isotope of Carbon that stays consistent in organic materials), this method is known as measuring the presence of a short-life radioactive element. This method of dating can be used to determine the age of organic material up to 50,000 years old and is especially useful in determining the age of ice age fossils.

Some igneous (volcanic) rock can be dated by the ratio of Uranium (U-238 and U-235) to Lead (Pb-206 and Pb-207) in uranium bearing minerals within the rock; this is known as measuring the long-life radioactive element plus its decay product. The decay of uranium to lead is very slow compared to the decay of Carbon-14 to Nitrogen-14. Uranium-Lead dating can be used to date rocks between 10 million and 4.5 billion years old.

Using a combination of radiometric and relative dating can yield precise dates for rocks, give or take a few decades to a few million years (some methods are more precise than others).

The Joggins Fossil Cliffs is a great example of relative dating. The tops of the cliffs have been worn down by glaciers and there is a layer of glacial till left on top. This means that the fossil cliffs are older than the most recent ice age (10,000 years). The assemblage of fossils found in the cliff match Pennsylvanian (upper Carboniferous) rocks that have been dated in other parts of the world. So, we know the cliffs are around 316 million years old. We know that the layers were laid down horizontally before they were tilted. The fossil trees and plants that stand upright in the cliff were sometimes preserved with their roots which indicates that the cliffs did not tilt over 180o. This means that the layer of the cliff moving south (right in picture) are younger. 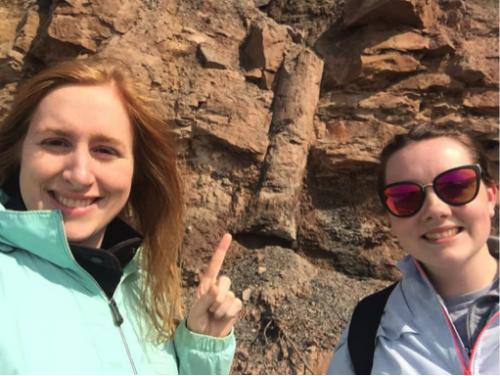 Our Jurassic fossil research site Wasson Bluff has been aged with radiometric and relative dating. The grey rock in the picture is basalt, a volcanic rock. The basalt was dated to be 202 million years old using Uranium-Lead dating. There are inclusions of basalt in the red sandstone, so we know that the sandstone is older than the basalt. The assemblage of fossils found at Wasson Bluff are consistent with other early Jurassic fossil sites. This leads us to conclude that the red sandstone at Wasson Bluff is just over 202 million years old. 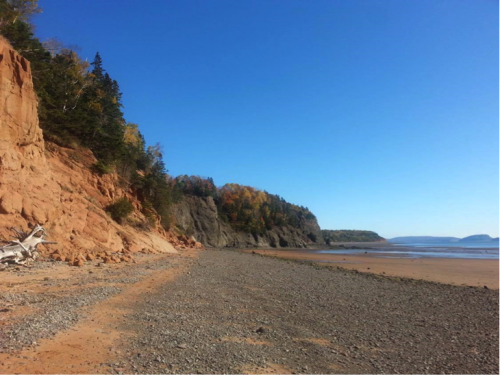 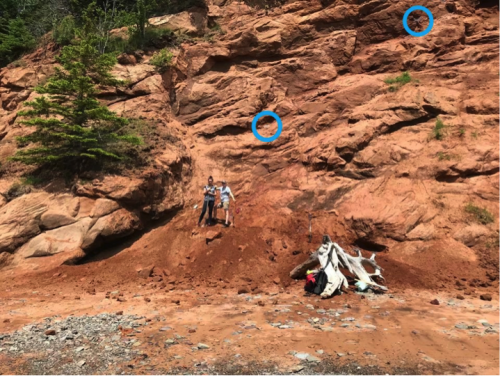 Inclusions of basalt in sandstone at Wasson Bluff.

This is just some of the basics of how geologists determine the ages of rocks. It can be a very complicated endeavour in practice but the principals behind the process are intuitive. Try it out yourself!