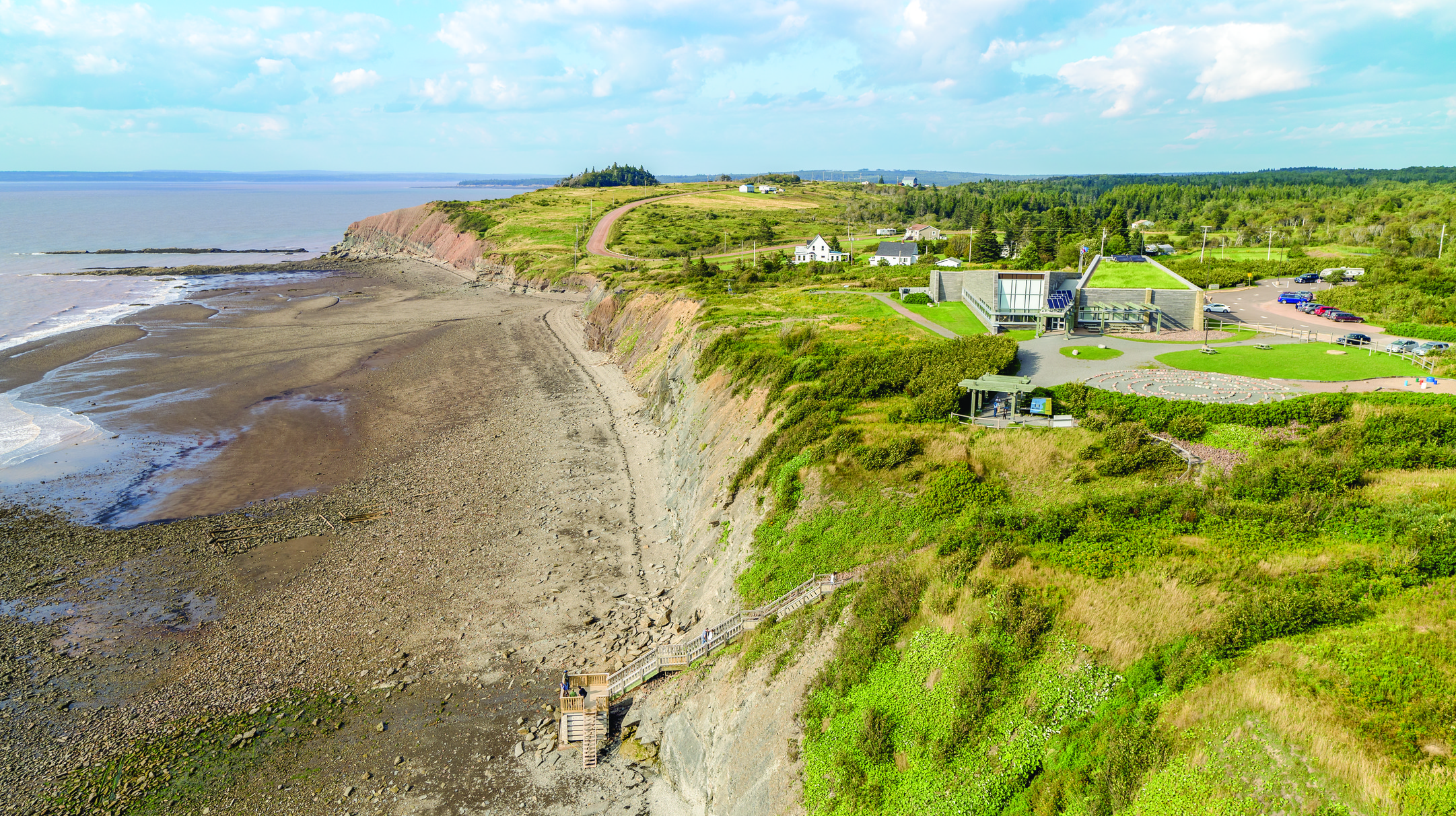 What are the Joggins Fossil Cliffs?

The Joggins Fossil Cliffs stretch over 15km of beach and encapsulate approximately 15 million years of Earth history. Layers of sediment were deposited one after another from a series of flooding events, which formed the cliffs that we admire today. 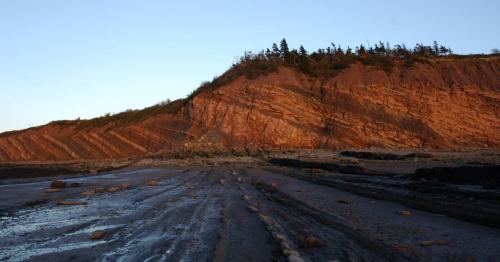 Image of the Joggins Fossil Cliffs. Here you can see the individual layers from each flooding event that have been tilted overtime. Image Source: https://whc.unesco.org/en/list/1285/

Imagine a forest containing various forms of life from just over 300 million years ago. There are 20-meter-high Calamites trees, giant Arthropleura crawling around the forest floor, and Hylonomus lyelli; the first reptile, building its home inside the stump of a lycopsid tree. Now imagine that a devastating rainstorm strikes, causing a massive flooding event. As a result, inches of sediment rapidly covered the forest floor and fill hollow logs and tree stumps; trapping some of the creatures who lived inside of them. This process repeated itself several times over the span of 15 million years, and each time it happened, a snapshot of the Carboniferous forest became trapped in time. These layers eventually lithified in the Earth’s crust and were tilted during movement of plates such as during the breakup of the supercontinent, Pangea. Because of these changes, we can move through geological time as we walk along the beach at Joggins.

Why are the Joggins Fossil Cliffs a UNESCO World Heritage site?

Joggins is the best place in the world to see a complete record of life from the Carboniferous period! Each layer of the 15km stretch of beach contains a snapshot of life over 300 million years ago. The cliffs are even mentioned in Charles Darwin’s book, The Origin of Species! The cliffs contain fossils such as the first reptile, Hylonomus lyelli, and the earliest land snail, Dendropupa. These species were used as key talking points to provide irrefutable evidence for the theory of evolution during the famous Oxford Debate.

If I go to Joggins, what can I see?

Lycopsid tree [A]- Trees such as Lepidodendron and Sigillaria used to grow up to 30m tall! They had a soft pith centre that was perfect for small creatures to build their homes inside. They were the dominate tree species during the Carboniferous period. Image source: https://jogginsfossilcliffs.net/cliffs/biodiversity/

Stigmaria [B]- These are the root fossils from a Lycopsid tree. They are very commonly found at Joggins. They can be seen either still ‘rooted’ in the cliff or loose on the beach. Image source: https://jogginsfossilcliffs.net

Calamites [C]- This giant relative of modern horsetails has a segmented trunk, which makes differentiating it from other plant material usually fairly easy. Image source:  https://jogginsfossilcliffs.net/cliffs/biodiversity/calamites_450x380.jp

Hylonomus lyelli [E]- Hylonomus is the earliest known reptile who brought the ocean onto land inside of their eggs. They would build their homes inside the stumps and fallen logs of Lycopsid trees. Sometimes these trees would flood or catch fire, trapping the reptiles inside and allowing us to find their fossil remains millions of years later! Image source: https://www.palaeocast.com/joggins-fossil-cliffs/ 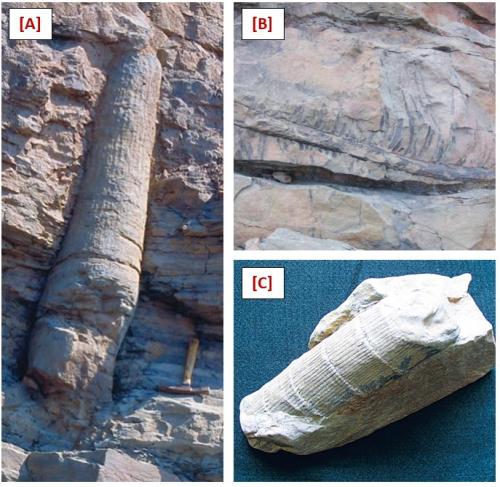 Dendrerpeton [F]- Dendrerpeton is the most common temnospondyl amphibian that lived during the Carboniferous period. Its body fossils and trackways have been found at Joggins and provide insights into the evolution of the earliest tetrapods (aka four-legged vertebrates). Image source: https://jogginsfossilcliffs.net/centre/fossil_gallery/#

Diplichnites (trackway) [G]- The fossil trackway seen here is called Diplichnites and the most likely trackmaker for this fossil is Arthropleura. Because fossil footprints often do not fossilize with the trackmakers nearby, they are given their own scientific name, separate from the organism that made them. Arthropleura could grow up to two meters long and are the ancient ancestors of modern-day pill bugs and silverfish (but were MUCH bigger). Arthropleura and many other insects in the Carboniferous period were able to grow to such a size in large part due to the abundance of oxygen that was present in the atmosphere at that time. 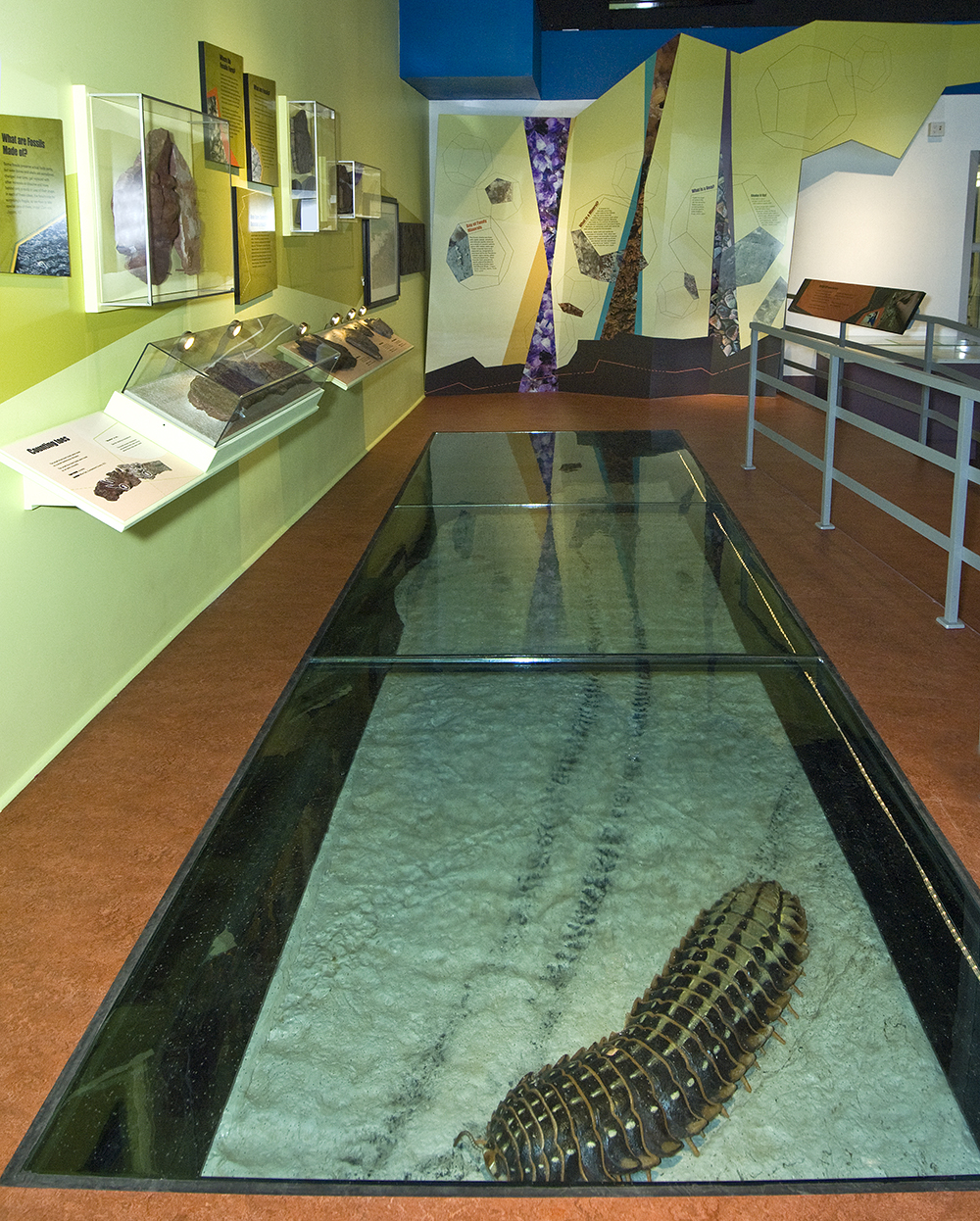