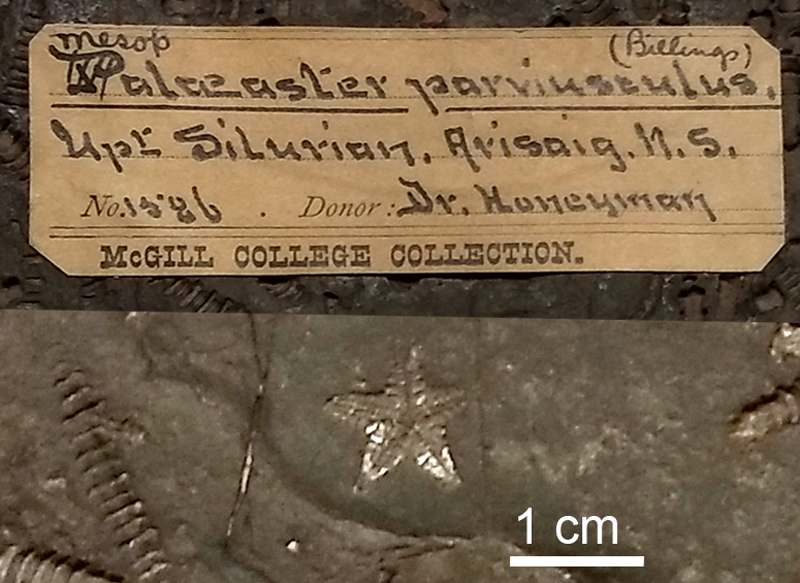 In April 1859, Rev. David Honeyman gave a public lecture on geology, describing the fossils and rocks at Arisaig, Nova Scotia. In his first published paper, David Honeyman reviewed the diversity of fossils he found along the scenic cliffs at Arisaig. Honeyman summarized the brachiopods, cephalopods, and crinoids, but the first fossil he mentioned was a tiny fossil starfish that he had sent to Dr. Dawson.

“The Uraster is different from any of the five figured and described in Murchison’s Siluria. The original cast was given to Dr. Dawson and a wax impression retained. It bears a striking resemblance to the common star-fish of our coasts, and doubtless the habits of the ancient corresponded with those of the modern.”   (pg 20)

After reviewing the fossil taxa that he had identified, Honeyman brought together his observations of the fossils to reconstruct and describe an ancient marine landscape preserved among the coastal cliffs.

“Our imagination takes its flight ;—in ages long gone we exist;—in old ocean’s still abyss, at a depth of seventy fathoms, we take our stand. We survey below, above, and around us ; there is life, activity and beauty. The Star-fish is bestirring itself ; he expands his rays ; he protrudes his feet ; he advances and climbs in search of his testaceous food. The Crinoid, whose name is legion, of varied size and beauty, with foot firmly attached to the rock, exercises its numerous joints and plies its busy fingers in search of food, or in conveying the tiny morsel to its proper receptacle.” (page 28)

“In conclusion, we see generation after generation becoming extinct—entombed in the clay of the ocean’s bed — this bed, by mechanical and chemical agencies converted into successive layers of rock—shoals of conchifers and their contemporaries, by means of their houses, forming interstratified limestone. We see nature, by chemical constituents of these rocks, oftentimes embalming their entombed inhabitants as no Egyptian physician could embalm; not to present, after a few thousand years, a dry and withered mummy, but, after years whose numbers we cannot imagine, to present them almost, if not altogether, as lovely as when they were at first entombed.” (page 28-29)

After his first publication in geology, David Honeyman would go on to make significant contributions as a geologist and as the first curator of the Nova Scotia Museum (#FindingHoneyman). The tiny fossil starfish from Arisaig was there when David Honeyman began his study of the geology of Nova Scotia.

Today, 160 years after Honeyman's first paper, the Nova Scotia Museum was visited by Dr. Fred Hotchkiss from the Marine & Paleobiological Research Institute in Massachusetts. During his visit to Halifax, Dr. Hotchkiss also identified papers that discussed and described the fossil starfish that Honeyman originally wrote about in 1859. A paper by Donovan and Pickerill (1995) summarized that Honeyman’s starfish had been described as Mesopalaeaster parviusculus by Charles Schuchert in 1915. With this new information at hand, we contacted colleagues at the Redpath Museum who provided us with an image of the historic Nova Scotia fossil.

Above: Composite photograph of the historic specimen label and the small impression of starfish fossil that was mentioned by David Honeyman in his first geological paper in 1859.  Photograph of the Mesopalaeaster parviusculus specimen (RM1586) used with permission of Redpath Museum, McGill University.

While in Halifax, Dr. Hotchkiss also shared information about his research during a public talk “Starfish and the Number Five” during a lunch-hour lecture at the Museum of Natural History. The lecture was attended by faculty and students from Acadia University, Halifax Field Naturalists, as well as the biology and curatorial staff at the Museum. The talk provided an informative overview of starfish that was creatively organized around the poem by Dr. Tatsuo Motokawa.

Dr. Hotchkiss was also returning a loan of research specimens, originally collected by Peter von Bitter back in 1967 and Dr. Reg Moore (Acadia University) in the 1980s. The research specimens are tiny fossil brittle stars (Ophioroids) that are over 300 million years old. Drs. Hotchkiss and von Bitter are studying the tiny fossils that will be described in a new publication. 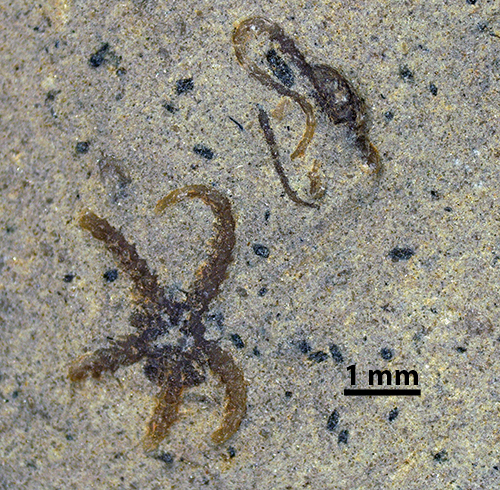 The recent public talk, the new research of the new brittle-star fossils, and ongoing research of historical collections demonstrate how David Honeyman’s early fascination with a fossil starfish continues to lead to new discoveries, sharing and learning in natural history – even after 160 years fossil starfish still capture our imagination.

Historical and recently discovered Nova Scotia fossils continue to play an important role in new research. Special thanks to Dr. Hotchkiss, and to Alexandra Bonham (Dalhousie University) for contributions to preliminary background research and Anthony Howell (Redpath Museum) for assistance with collections.