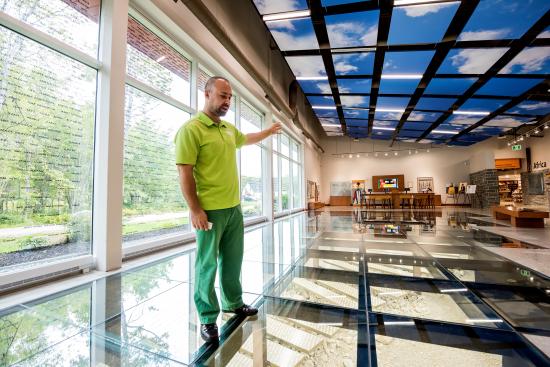 In addition to the Centre, you can also visit historic buildings and the National Monument commemorating the Black Loyalist Landing in Birchtown in 1783.

As you explore our site, which is located on a stunning two-acre property overlookiing Shelburne Harbour, you will experience a sense of peacefulness in knowing you are walking in the footsteps of our ancestors, as the southeast breeze blows through your hair and Acker’s Brook babbles in the background.

The Baskets of Black Nova Scotians is a history of the basketmaking tradition brought to Nova Scotia by the Black Refugees during the War of 1812. These escaping slaves were brought up from the Atlantic seaboard to freedom by the British Navy. The book features illustrated examples of work and construction techniques as the tradition is continued today by their descendants. This ebook is available free of charge through the Nova Scotia Museum Publishing catalogue.

Between 1783 and 1785, more than 3000 Black persons came to Nova Scotia as a direct result of the American Revolution. They came from slavery and war to take control of their lives, making choices within the limits they faced.

The Nova Scotia Archives is pleased to mark the designation of 2011 as the United Nations International Year for People of African Descent, by adding a significant new online archival resource to its existing virtual exhibits on African Nova Scotians. We have made available over 500 digitized and fully searchable Government documents relating to early African Nova Scotian immigration and emigration.

More than two centuries later, descendants of the Black Loyalists are calling to the spirits of their ancestors and discovering the stories of their struggles and triumphs. Meet some of the courageous men and women who founded two Nova Scotian Black Loyalist communities, Birchtown and Tracadie in the late 1700s and early 1800s.

Students follow the footsteps of Black Loyalists as they make the epic journey from slavery to freedom.  The program begins with a survey of the origins of the Black Loyalists, their experience of slavery, and their arrival in Nova Scotia. Students are then divided into small groups. Most students will then examine real artefacts to draw conclusions about the daily life of Black Loyalists in the late 18th century. One group will create short skits to dramatize selected events in the lives of two Black Loyalists. The skits will then be performed in costume for the rest of the class.

The commemoration of African Heritage Month (February) in Canada can be traced to 1926 when Harvard-educated black historian Carter G. Woodson founded Negro History Week to recognize the achievements of African Americans. Woodson purposefully chose February for the birthdays of Frederick Douglas and Abraham Lincoln, both key figures in the emancipation of enslaved blacks: In 1976, as part of the American Bicentennial celebrations, Negro History Week was expanded to Black History.

The vast contributions of African-Canadians to Canadian society have been acknowledged, informally, since the early 1950s.  In December 1995, the House of Commons officially recognized February as Black History Month, following a motion introduced by the first Black Canadian woman elected to Parliament, the Honourable Jean Augustine. In February 2008, now retired Nova Scotia Senator Donald Oliver, Q.C., the first Black man appointed to the Senate, introduced a motion to have the Senate officially declare February as Black History Month. It received unanimous approval and was adopted on March 4, 2008. The adoption of Senator Oliver’s motion was the final parliamentary procedure needed for Canada’s permanent recognition of Black History Month.

2021 markeds the first year the Province of Nova Scotia officially recognizes Emancipation Day. Emancipation Day is marked throughout the Commonwealth as the anniversary of the abolition of slavery in the British Empire in 1834.

The Nova Scotia Museum is used this first recognition of Emancipation Day in the province to highlight items from the Collection. These items provide evidence and insight into the lives of people of African descent who have lived in or been connected with Nova Scotia.