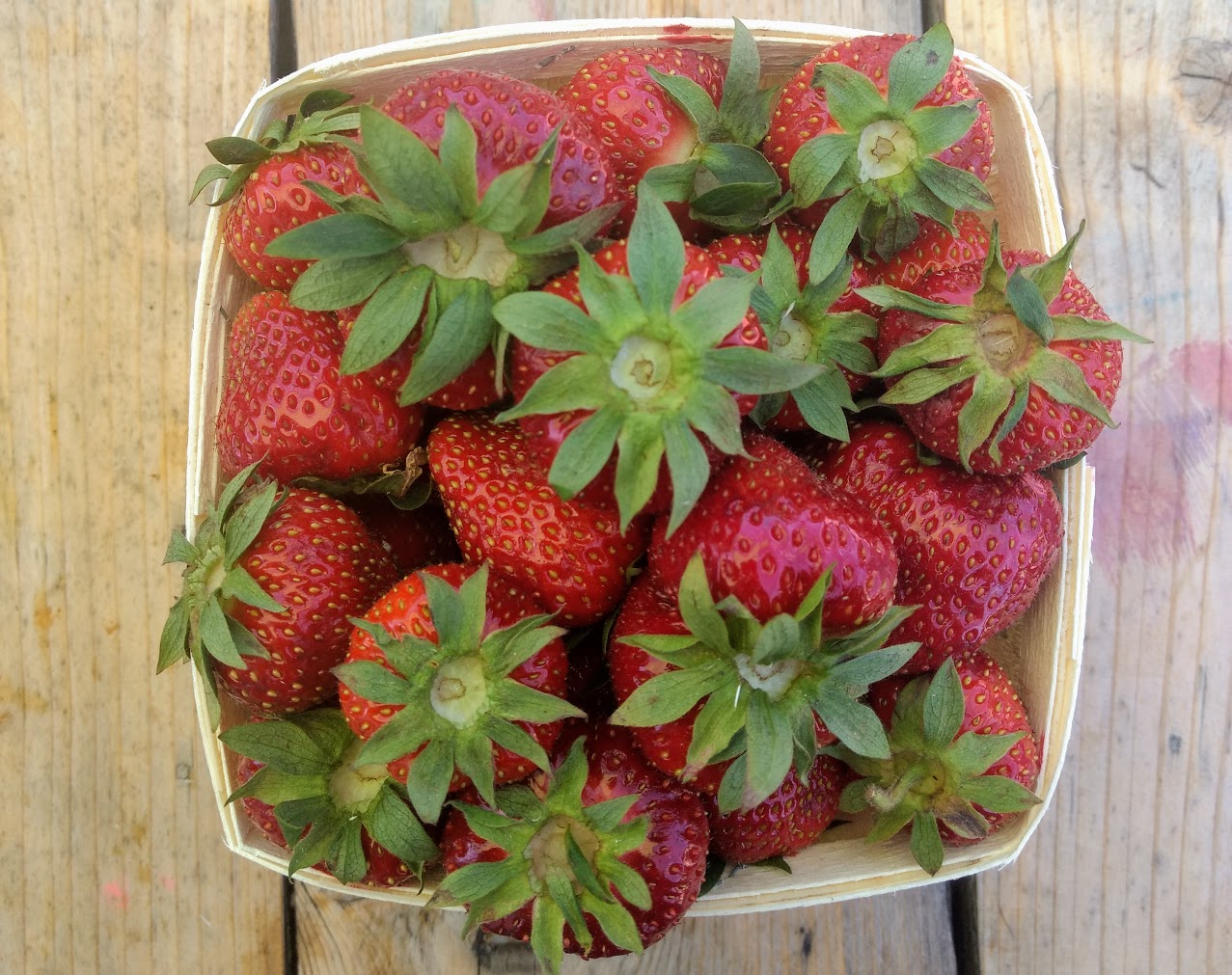 “We had a feast of strawberries, the first I have seen.”

You always know summertime has officially arrived in the Annapolis Valley when the first strawberries appear. Farm markets are full of overflowing boxes of sweet, red berries, local newspapers begin advertising, and hand painted signs appear all over roadways and in front of churches and halls inviting the community to gather for a strawberry social. 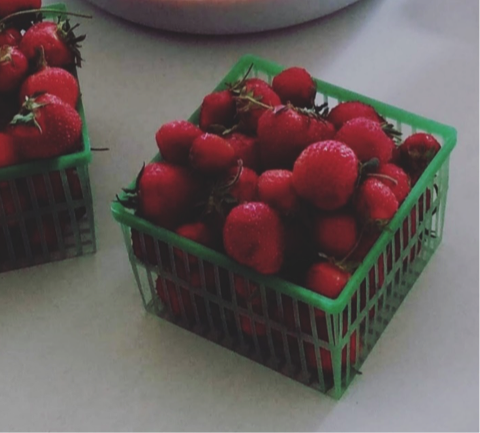 Strawberry season begins in late June and can last for several weeks. Many modern-day strawberry fields have U-picks and stalls by the side of the road for locals and visitors to get their strawberries fresh off the vine.

When Mary Prescott bought her great-grandparent’s estate, Acacia Grove, in the 1930’s, part of her restoration included the installation of a rock garden and a kitchen garden, which of course included strawberries. A century earlier, we do not know if her great Grandfather, Charles Ramage Prescott, grew domesticated strawberries in any of his greenhouses or walled garden, but his niece Mary Ann Norris who lived in a neighbouring farm, has several diary entries describing picking early summer strawberries.

“I worked very hard in the garden until 12 o’clock and then I went to get some strawberries.” 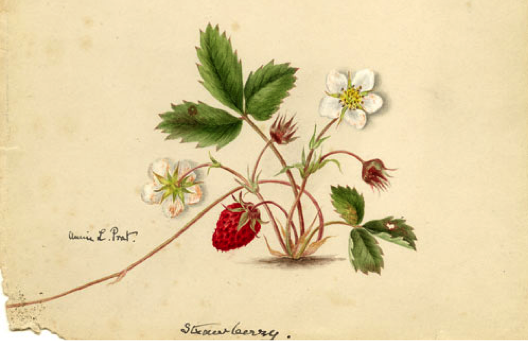 “A large party of us set out to go to Canaan for strawberries but it came on to rain so hard that we were all obliged to return home. “

Strawberries always involved a group somehow. Mary Ann Norris would write about group picking parties that would head out into rural Kings County to find berry picking areas. But even if she or someone else in her family or community ventured out on their own to gather strawberries, the communal part was sure to follow because strawberries are meant for gathering and sharing.

“I spent the day at Uncle’s [Charles Ramage Prescott] assisting Aunt [Maria Prescott].  Had a fine feast of strawberries.”

Summertime in Nova Scotia could be summed up with a bowl of ice cream, biscuits, and mashed strawberries-maybe even a cup of tea- surrounded by friends, neighbors, and family. Strawberry socials and dinners abound and have an extensive history in the Annapolis Valley. Prescott House Museum’s site manager Nancy Morton wrote that the Anglican Church in Port Williams hosted a ham dinner with strawberry shortcake annually for nearly a century, and similar events fill late June and early July in every village throughout Kings County. 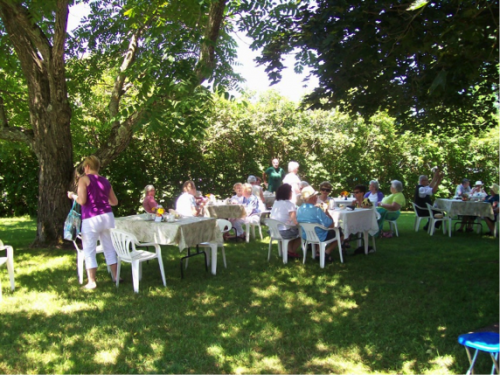 “I drank tea down at Uncle’s [Acacia Grove]. They had a little tent erected out in the strawberries and we went out and partook of some refreshments after tea.”

Two centuries ago, Charles and Maria Prescott had a tent set up near their strawberries, either in a field, garden, or greenhouse, and had their own small party with tea, refreshments and strawberries-the very first Acacia Grove strawberry social! 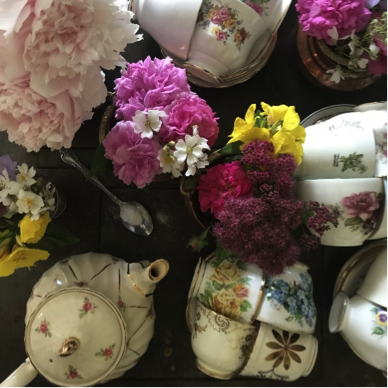 Nancy found an excellent biscuit recipe, by Diane Kinsmen from the Kingsport Association Cookbook. The secret to good biscuits is, “to be gentle with the dough and not knead it too much for a light flaky biscuit.” In Atlantic Canada, the popular preparation method for fresh strawberries involves washing and hulling the berries, placing them in a large bowl and mashing them with a potato masher. And then adding sugar to taste. It makes a fresh, cool, tangy jam-like sauce. And in addition to the fresh homemade biscuits, and juicy mashed strawberries, Nancy has always served tea and a generous helping of vanilla ice cream. 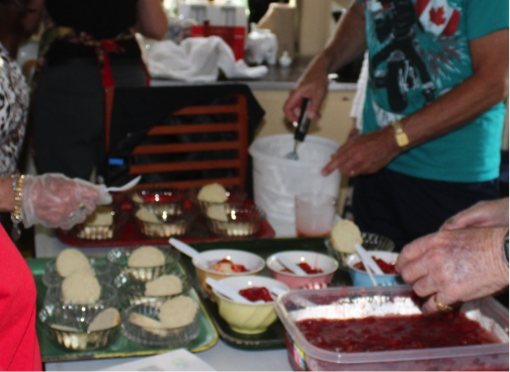 On the fifth strawberry social, the Forever Young Fiddlers were invited and for nearly 15 seasons they have serenaded the guests with old time fiddle music and songs. 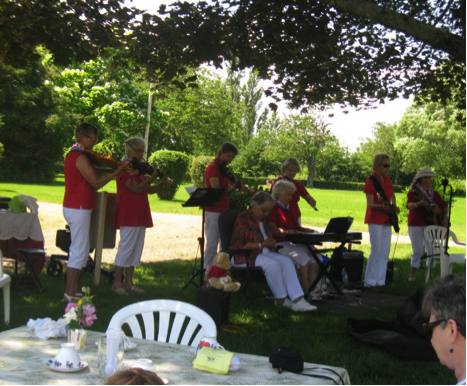 Recent years have seen the addition of volunteers to help get the strawberries, biscuits, and hot tea out to guests. One memorable year included the Port Williams Apple Blossom Princesses, who came to help serve in their complete attire.  More recently, the local Gold Wing Road Riders Association has offered to volunteer. The last two socials have had motorcycles parked in rows with volunteers in matching vests bustling around the kitchen and back stairwell before gracefully delivering heaping bowls of strawberries and china teapots of tea to guests seated at tables across the lawn. 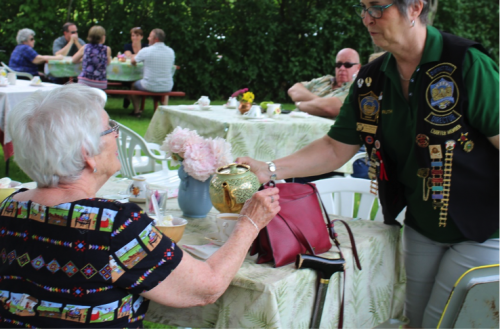 2019 was the final Strawberry social hosted by Nancy, the staff, and volunteers at Prescott House Museum. In its 15-year history, it was always hosted outside and was never cancelled due to weather. Last summer, the forecast even called for rain with a short, stormy shower that immediately cleared into beautiful sunny skies at the beginning of the social.  Nancy wrote, “Oh, it has been close to cancelling a few times, but the Prescott Sisters were looking after us!”

There might not be any community suppers or afternoon socials planned for the 2020 summer season, but right now in Kings County, Farmers Markets and roadside stalls are still overflowing with fresh strawberries. We hope you have the opportunity try some, maybe even host your private strawberry social, and experience this delicious piece of Nova Scotia history!