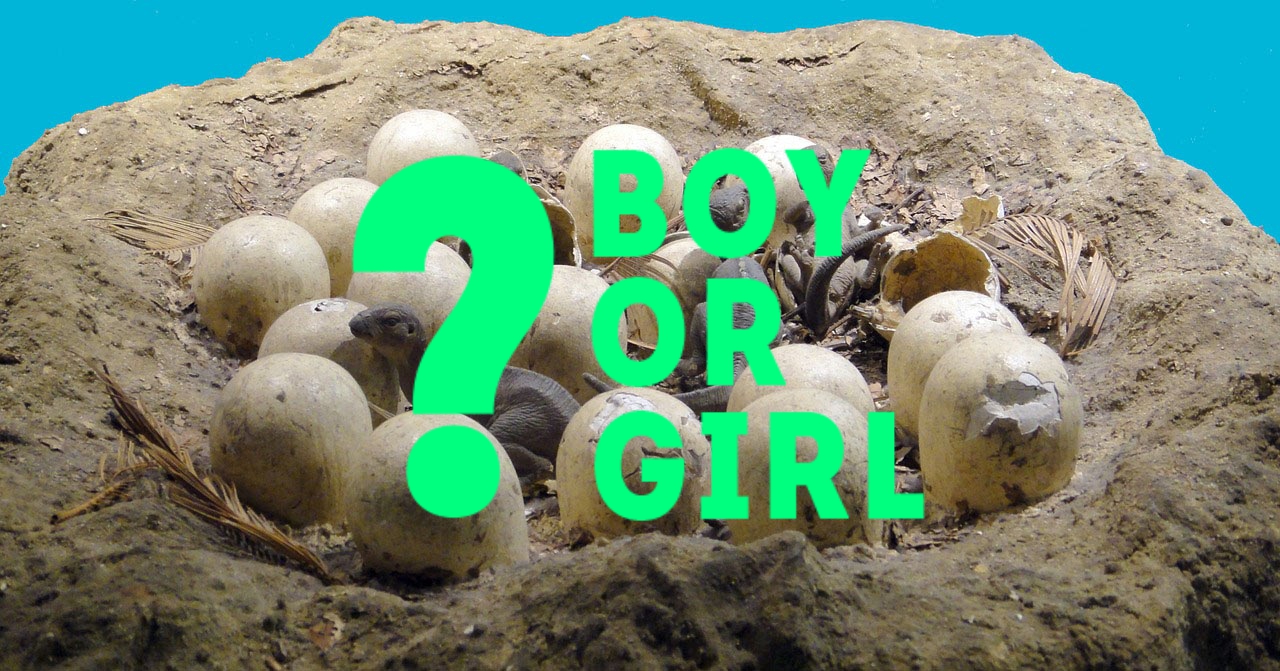 Determining the sex of a fossil

“Is the dinosaur a girl or a boy?” has got to be one of the most common questions I’ve gotten over the years while working at museums. Most of the time, we have no idea! Human skeletons are fairly unique in the animal kingdom. We can tell our own biological male skeletons from biological female skeletons by looking at the pelvic region. Human female skeletons have a bigger pelvic opening (aka an enlarged sciatic notch) compared to males in order to give birth. Oddly enough, this is not standard for live-bearing organisms such as placental mammals and even some viviparous reptiles. This means that without soft tissues that carry DNA (que the Dino DNA cartoon from Jurassic Park), we rarely have the info needed to determine the sex of any animal skeleton, let alone those that have been fossilized over millions of years! The exception, you ask? Well sometimes a pregnant mother dies and is eventually fossilized with her fetus(es) intact. It’s pretty obvious what her sex was when she died although it is worth noting here that some species can either change their sex during their lifetime (Japanese wrinkled frog), produce offspring without a mate (New Mexico whiptail lizard), or be able to mate with itself since the animal has both male and female reproductive organs (banana slug).

At this point you might be wondering “If it is so hard to determine the sex of a dinosaur, why bother trying to figure it out?” While determining the sex of a fossil is very low on  my Important Questions That Need Answering List (and yes, all paleontologists have this list somewhere), we do like to make educated guesses about sex and how it played a role in species behavior. Humans commonly make the assumption that females are better caregivers to their offspring but that is often not the case in modern animal group dynamics. Many species show either 1) the father being the primary caregiver, 2) both parents or a group of adults equally caring for all young, or 3) adults that simply do not raise their young. There are a few generalizations that can be applied to fossils though- sexual dimorphism being the most common. Sexual dimorphism is when there are obvious physical differences between males and females of the same species. This is sometimes used to assert the (mistaken) assumption that most males are bigger than females. Some notable examples in mammal species- male lions are larger and have luscious locks compared to females, bighorn sheep rams have significantly larger horns than ewes, etc. However modern birds often display what is commonly referred to as reverse dimorphism, where the female is bigger than the male. Since birds are descendants of theropod dinosaurs you’d think suggesting females were larger would be a safe bet, right? Unfortunately, it’s a bit more complicated than that. And then there’s the question of what about the non-avian dinosaurs like Brachiosaurus and Triceratops?

The last important factor of determining the sex of a fossil has to do with the inside of its bones- the medullary cavity to be exact. Put simply, modern female birds that are ready to become pregnant will build up stores of extra calcium within their bones to create the eggshells for its offspring. A few theropod dinosaur fossils (T. rex and Allosaurus) and at least one ornithopod (Tenontosaurus) have been reported showing this bone structure to date. Considering how universal this is in modern avian dinosaurs (birds), it is well within reason to expect more theropod fossils to be found with this structure which can consequently tell us if those fossils were female or not.

Oftentimes paleontology is the study of questions that we’ll never see the answers to in our lifetimes, and that’s ok. It takes a special kind of person to devote their career to a field that almost always end in another question, rather than a conclusion. But that is how science works best- when we’re all striving to discover new things, no matter what those turn out to be.

TL;DR- Most of the time paleontologists have no idea if a fossil is a girl or a boy. #ThoughtsOnRocks