A dramatic collapse of a section of cliff at the Wasson Bluff fossil site was captured by a time-lapse camera installed by Museum researchers. The section of cliff collapsed during the winter storm on December 6th, 2017. The video was published on the Fundy Geological Museum Facebook Page.

Weather records for that day show the temperature rose rapidly 13C and the tide was at a very high (13.6 m) portion of the tide cycle. The collapse happened sometime at night, perhaps during the next high tide at around 3:00 am.

With the warm temperatures and rain, the cliff ice melted and the cliff collapsed as the waves of high tide pounded at the base of the cliff.  After sunrise, the extent of the collapse was visible, with large boulders and trees strewn across the beach.

Before and after collapse of the cliff at the fossil research site at Wasson Bluff.

The communities along the Parrsboro shore are accustomed to the power of the tides and changes in the coastline. In October 2015, the community of Five Islands woke up to notice that a long standing landmark had collapsed during the night. After years of erosion, the weakened arch collapsed during a strong wind storm.  The local landscape changed forever, again. The coastline is constantly changing, with every tide and with every season.

Learn more about the arch collapse on CBC News 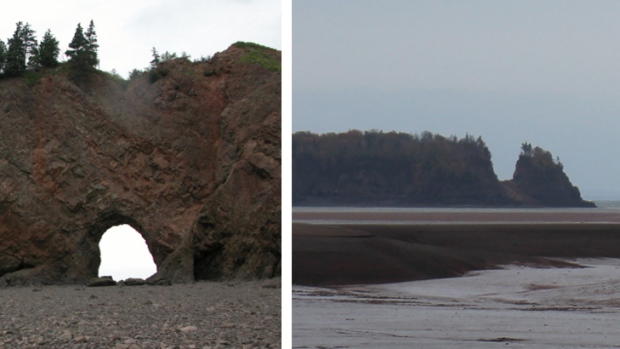 The recent collapse of the cliff at Wasson Bluff was not unexpected. Researchers at the Fundy Geological Museum had noticed the cliff had visible cracks and weak zones. Last year Museum staff and assistants had been working at a fossil site located near where the cliff collapsed, and had been avoiding the area. The video provides a good opportunity for people to learn the importance of using caution when walking near coastal cliffs.

The tides will continue to erode the debris pile through the remainder of the winter. The erosion created by the powerful Bay of Fundy is a benefit to museum researchers. The new erosion will expose new fossils of 200 million year old animals preserved in the rocks. Researchers will collect any significant fossils exposed when the weather warms up and the risk of new erosion decreases.

The recent erosion occurred near a fossil research site that is being studied by the Museum scientists. The Museum provides new opportunities for summer visitors to participate and assist with collecting real dinosaur fossils. The “Tidal Reveal: Dig for Canada’s Oldest Dinosaurs” program provides a unique opportunity to travel to the dig site during a one-hour boat trip along the shore, dig fossils with Museum researchers and a enjoy the amazing views and tides with a delicious lunch. An experience of a lifetime!

This summer, learn more and visit the Fundy Geological Museum on the beautiful shores of the Bay of Fundy.